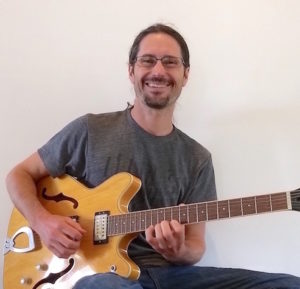 How I went from playing air guitar riffs at age 8, to a lifelong exploration of music.

Hi, my name is Miles Pearce. When I was 8 years old I got my first guitar. I still remember holding that guitar before I knew anything about it, and pretending to play these awesome riffs all over the fretboard. To anyone else it probably sounded like a cacophony of jangling strings, but in my imagination at that moment it was incredible! Although I was about to begin a many years-long process of being a beginner, I began the journey with the belief that some day I would achieve my guitar dreams.

The good news is that you don’t have to work as hard as I did to achieve your own guitar dreams, because I spent the last 30 years mapping out all the shortcuts for you! In fact if I had to do it all over again… Well the first thing I would do is use a timer app to track my practice, which I recommend you do as well. It’s quite satisfying.

I started studying classical guitar when I was about 4 feet tall. I liked the guitar, but I wasn’t very excited about classical music. My teacher Will Martin was cool, you had to climb a ladder to get to his music studio. After a few years he realized that I was not bound for classical guitar greatness, and suggested I try some other styles. In high school I started a garage band with my best friend. We had one gig, and it was terrible. Despite the failure of this first ensemble, I was apparently respected as a guitarist because another friend asked me to give him lessons during our lunch hour. I charged him 8 bucks for a 45 minute lesson, which was the most money I had ever made in my life. It seemed like a good idea at the time, so I started offering guitar lessons to anyone who would listen to me, and the rest is history.

I got my B.A. at Wesleyan University in Middletown CT, where I studied with the great jazz guitarist Tony Lombardozzi, who taught me chord theory and technique. He was also my biggest inspiration as a music teacher. I modeled a lot of my approach on his easy-going and fun teaching style. While I was at Wesleyan I studied South Indian classical music with the legendary T. Viswanathan, West African percussion with master drummer Abraham Adzenyah, experimental music with Anthony Braxton, enthomusicology, music theory, and composition.

In 2003 I studied North Indian classical music with Emu Desai, learning Ragas and complex Indian rhythmic concepts. I also began learning classical Indian rhythms from tabla player Loren Oppenheimer, as we began our early musical collaborations. In 2004 I met master Brazilian guitarist Humberto O Sáles and began studying flamenco guitar with him. This was a pivotal turning point for me. Flamenco was my first true love on the guitar, and has completely changed my approach to the instrument. In 2015 I studied with the great Colombian flamenco guitarist Juan Benavides who helped me take my technique and rhythm to another level.

As for performance I am currently collaborating in three different music projects. I play with guitarist Humberto O Sáles in a Latin guitar duo, accordionist Matty Metcalfe playing Argentine Tango music, and percussionist Loren Oppenheimer playing an original mix of Indian classical music and Latin guitar. I practice every morning with a cup of tea and a metronome.

Take your playing to the next level with monthly or weekly lessons based on your favorite music!